Unlike Metro’s problematic proposals for Eagle Rock to eliminate medians, bike lanes, and curbside parking, the Beautiful Boulevard proposal preserves each of these important features with a green and sustainable solution that would make Metro’s new transit line a once in a lifetime investment in a more vibrant, walkable, and family-friendly Downtown Eagle Rock. This is a new plan for making new transit service work for our community developed for Eagle Rockers by Eagle Rockers. 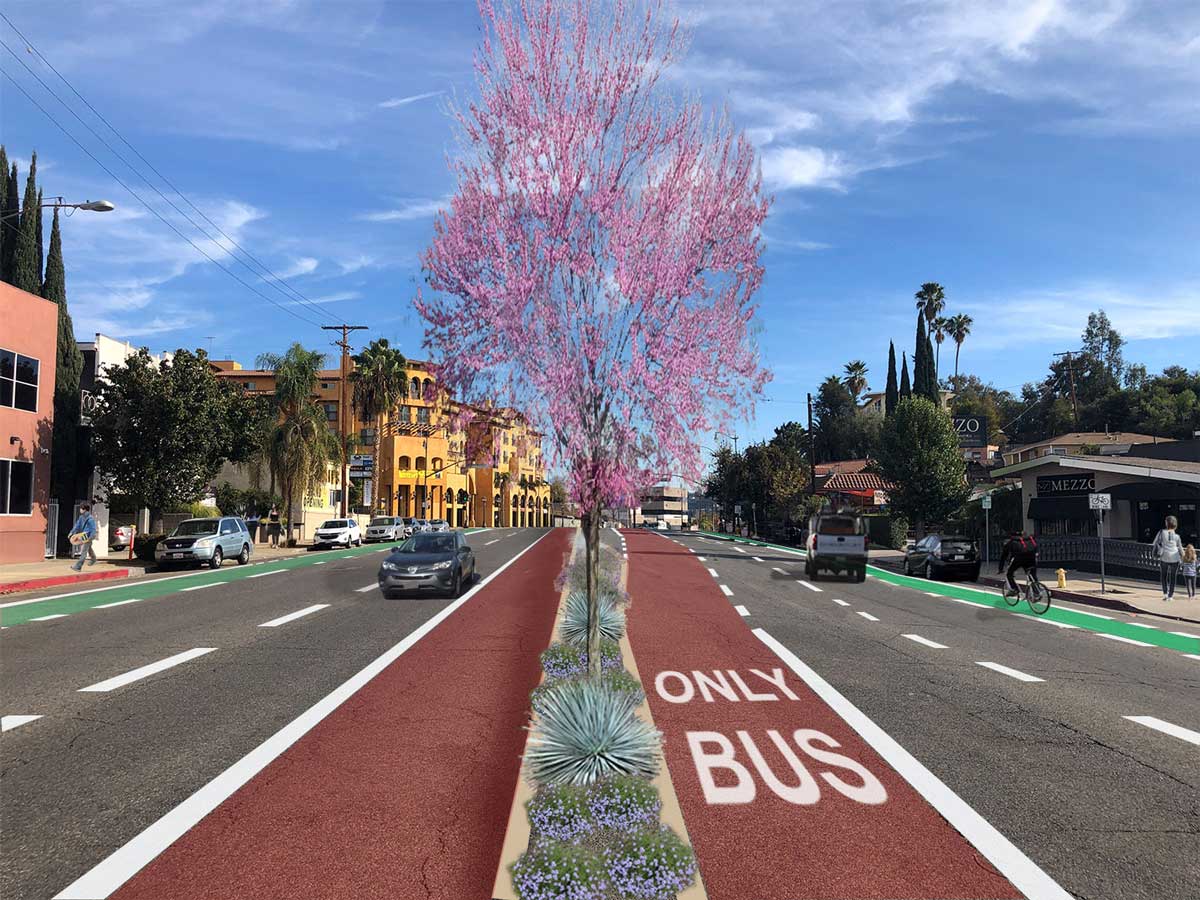 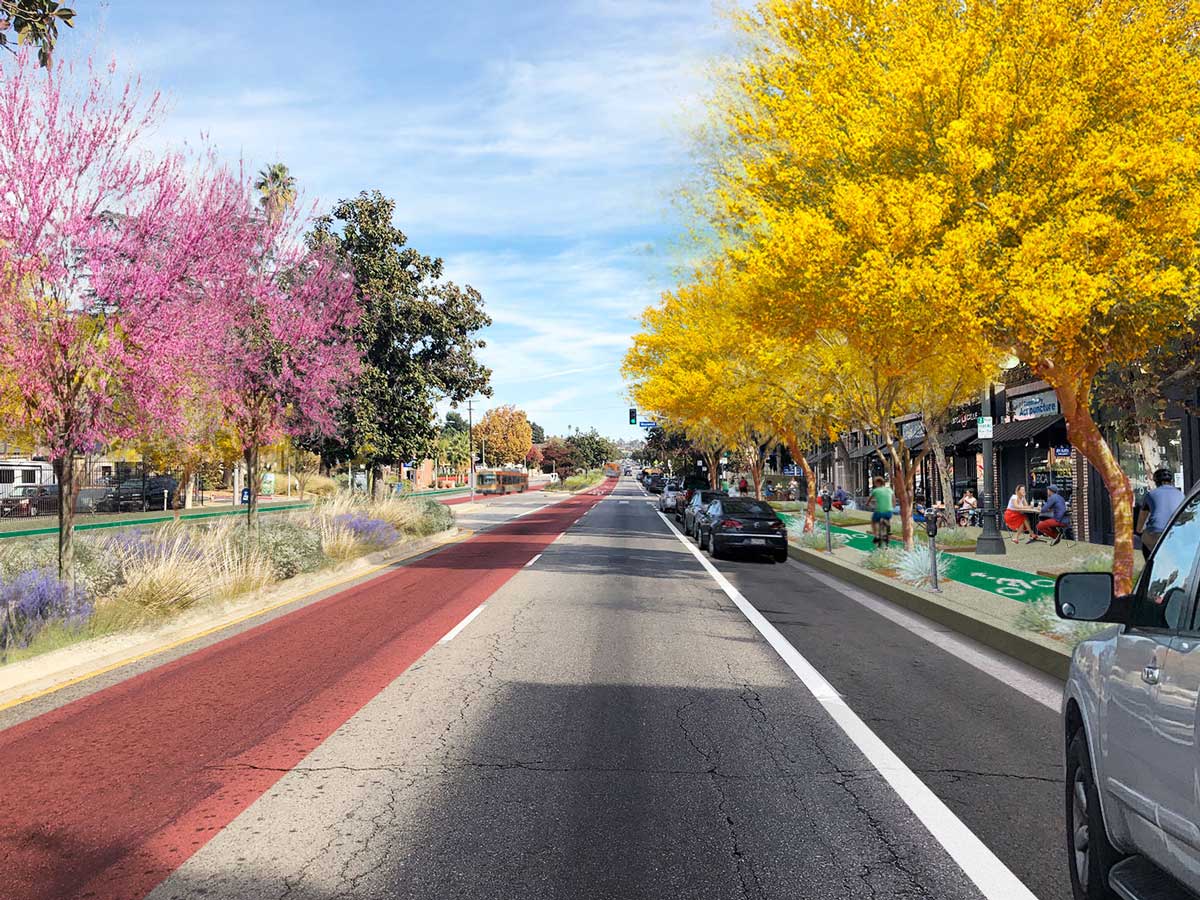 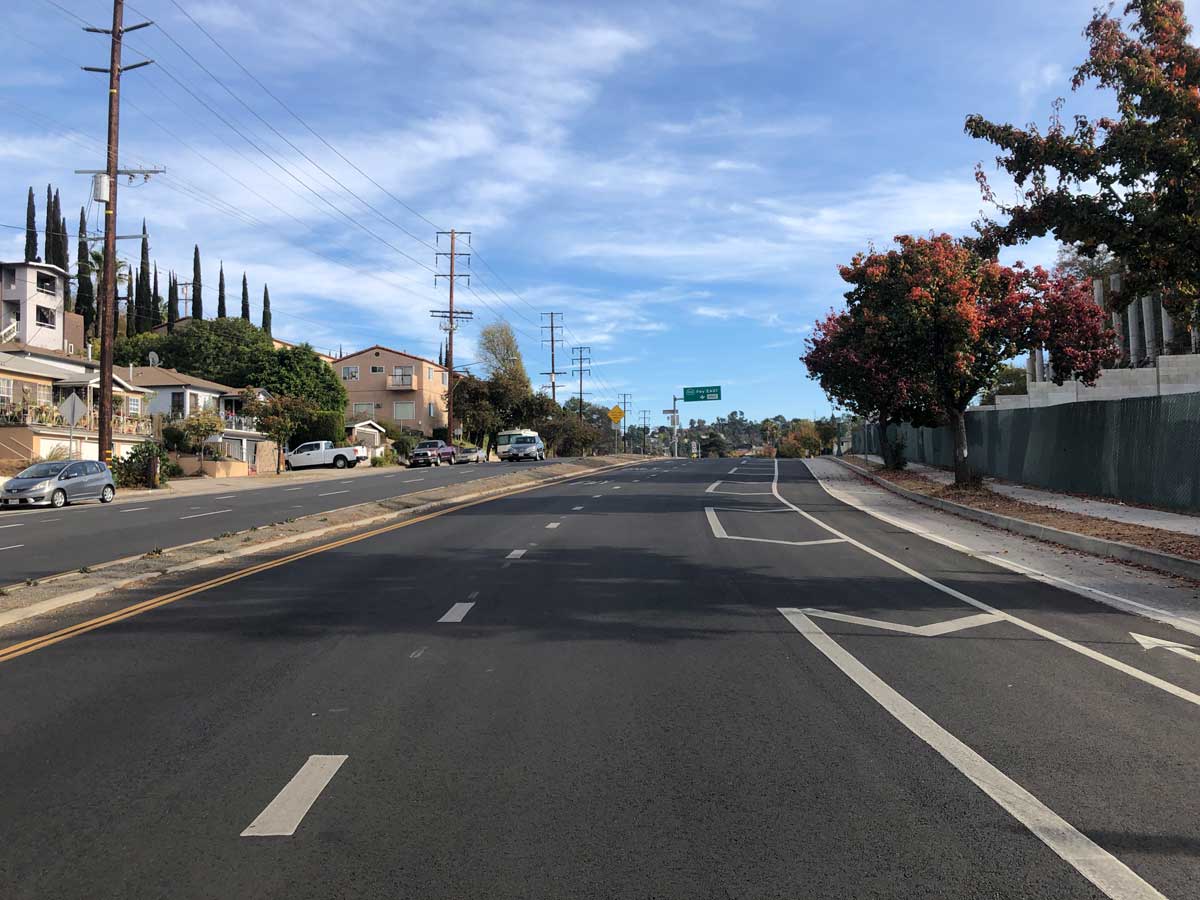 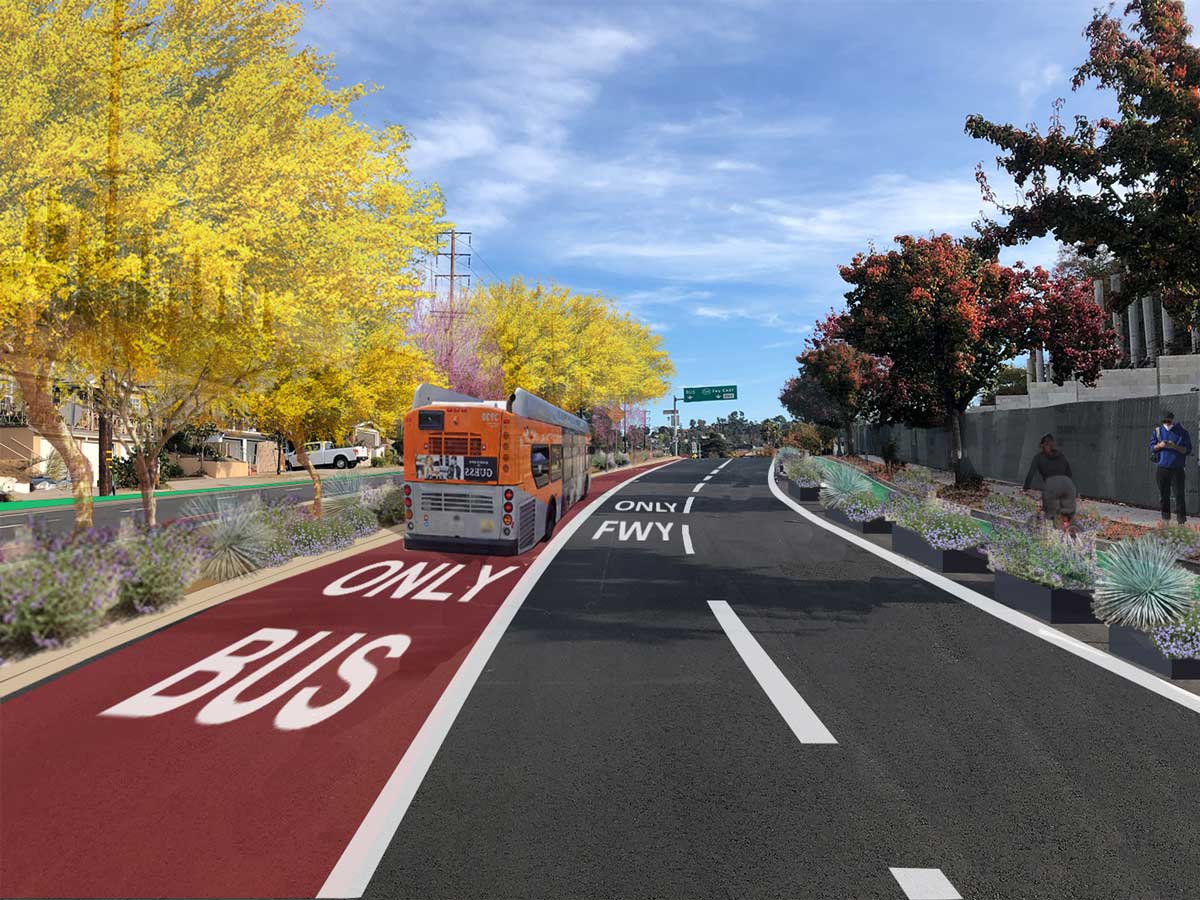 You can help make this beautiful street concept a reality!

Go to www.eaglerockforward.org/take-action to add your name to the petition and tell our elected leaders to bring the Beautiful Boulevard to Eagle Rock!

Metro will host two virtual public hearings in November to review its Draft Environmental Impact Report that calls for the elimination of bike lanes on Colorado Boulevard. Attend these meetings to demand that Metro provide a project in line with the Eagle Rock community’s vision for a safe, healthy, vibrant, and sustainable street.

Metro is set to present options for its North Hollywood-Pasadena BRT project to the Eagle Rock Neighborhood Council (ERNC) on Tuesday, September 1 at 7pm. Metro’s presentation is agenda item “III.G.”

Please attend this virtual meeting to demand that Metro consider equitable and sustainable options that improve safety on Colorado Boulevard.

Following Metro’s decision to re-introduce the previously rejected 134 Freeway alignment as part of the Draft Environmental Impact Report (DEIR) for the proposed North Hollywood-Pasadena Bus Rapid Transit (BRT) line, Equitable Eagle Rock calls on the Metro Board of Directors to base its final alignment decisions on the evidence gathered in the DEIR that best meets the project’s goals and best serves Metro riders.

With the return of this “Zombie Option,” Eagle Rock once again remains at risk of being left out of this vital transit link. It is unfortunate that a vocal misinformation campaign waged by opponents was sufficient for the Metro Board to override the evidence gathered in the Alternatives Analysis, but we expect the DEIR will show definitively why the Colorado Boulevard alignment is a more equitable and environmentally superior option. Additional study should finally put this Zombie Option to rest. However, it only has the capacity to do that if the Metro Board of Directors commits to basing their final decisions on the evidence, not on political pressure from a small segment of the population that does not agree with goals for higher quality transit widely supported by Los Angeles voters and the Metro Board.

The benefits of a Colorado Boulevard alignment for the people of Eagle Rock and all who travel along the corridor are clear. A street-running BRT will:

As Metro prepares the DEIR, we expect to see proposed designs that work creatively to meet the needs of our community. With thoughtful design, we believe the implementation of dedicated bus lanes should complement existing neighborhood character and accommodate community-driven enhancements that make Eagle Rock a great place to live, work, shop, study, and play. Equitable Eagle Rock maintains that the following project design elements are essential to the success of BRT:

While the Zombie Option is now part of the DEIR, the best way to put it to rest is by advocating the best possible vision for Colorado Boulevard. Metro will hold five interactive community workshops soliciting ideas about how to implement the BRT project; three sessions focused on Colorado Boulevard will be held in Eagle Rock.

Mark your calendars and join us at any of the three workshop sessions at Yosemite Recreation Center, 1840 Yosemite Dr, Los Angeles, CA 90041 on November 16. Workshops will be held from 9am-10:30am; 11:30am-1pm; 2pm-3:30pm. The location is directly served by Metro Local 181 (stop: Yosemite/La Roda) and a 6 minute walk from LADOT DASH service along Townsend Ave. Info on additional November Metro meetings is listed on our “Get Involved” page.

On October 26, Equitable Eagle Rock celebrates 6 years of bike lanes on Colorado Boulevard in the heart of Eagle Rock! Join us and other neighbors for a casual bike ride followed by lunch nearby. We’ll discuss safe streets and share ideas to make Northeast LA a more bikeable and walkable place.

For a look back:

Streetsblog LA Fact Check: Will BRT Automatically Trigger Corridor Up-Zoning? Not Anywhere Near as Much as Opponents Say It Will

If one believes the claims of Bus Rapid Transit opponents, BRT has a tremendous power to “automatically” up-zone entire corridors and bring massive new “six-story” canyons of towering development to L.A. neighborhoods. Their rhetoric is, of course, overblown. The truth is that current “automatic up-zoning” is very limited and very targeted.

The primary program under fire here is the city of Los Angeles’ Transit Oriented Communities (TOC) Affordable Housing Incentive Program. (Technically, TOC incentives are discretionary bonuses – semantically not what planners would term an up-zone – but for this article SBLA will go with the vernacular and call these bonuses an up-zone.) TOC was approved by a majority of city voters in 2016. The program has been effective in greenlighting 4,000 new homes. TOC is now receiving criticism from various homeowner interests, and is the subject of a questionable Fix the City lawsuit that seeks to halt the program.

The North Hollywood to Pasadena corridor connects the San Fernando and San Gabriel Valleys and is home to approximately 800,000 people and 400,000 jobs. This area includes major job centers, bedroom communities and many colleges and cultural opportunities.

But there’s one big thing lacking: a great transit connection for those traveling between the Valleys. Metro has exactly one bus line traveling between Old Pasadena and North Hollywood, but it mostly sticks to the 134 freeway and misses many neighborhoods and destinations along the way.

This is why Metro is working to build a bus rapid transit (BRT) line to serve North Hollywood, Burbank, Glendale, Eagle Rock and Pasadena. BRT is a type of bus line that is faster, more frequent and more reliable by using features that could include traffic signal prioritization, all-door boarding, upgraded bus stations and dedicated bus lanes.

Theme by Anders Noren — Up ↑